The beautiful city of Nafpaktos (Nafpactos) with its unique small and picturesque Medieval port, the big castle on top of the hill that overlooks the old city and the coasts of Peloponnese, the 2 long beaches on either side of the city and the narrow alleys with the traditional houses offers more than a visitor may see during a usually weekend time period.

The story begins somewhere in 1,500 BC when Dorians stopped there to build the fleet needed to pass to the opposite coast of Peloponnese. The prominent geographical position at the entrance of Gulf of Corinth has the apple of discord in antiquity but also in the Christian era.

During the 15th century conquered by the Venetians and finally liberated by the Greeks until 1829. Date landmark in the history of Lepanto and the whole of Europe is October 7, 1571 when at the Gulf of Nafpaktos the united European Fleet manages an overwhelming victory over the previously dominant Turkish fleet, thus ending the domination of the Mediterranean Sea as well as any aspirations had at that time the Ottoman Empire extended to the Western world.

Today Nafpaktos is a relatively small but beautiful city with a large department built an amphitheater on the slopes and lush green hills and the course which overlooks the stunning castle.


It is one of the largest and best preserved castles in Greece which, after many speeches over the centuries has come to its present form in the early 16th century. Access to Nafpaktos castle can be done very easily by car, although it is better if you walk from the Venetian port and go up to the castle through the old city with its flower gardens and stone paths.

You will see the impressive white old Botsari tower, now works as a private museum, and cross one of the gates to the old wooden and pestered by would-be conquerors gate. Halfway through you’ll find two or three cafes with superb views of the city and the Peloponnese, and from there the road will keep track of dozens of walking in the shade of pine trees. After a few hundred meters you will reach the main entrance of the castle. 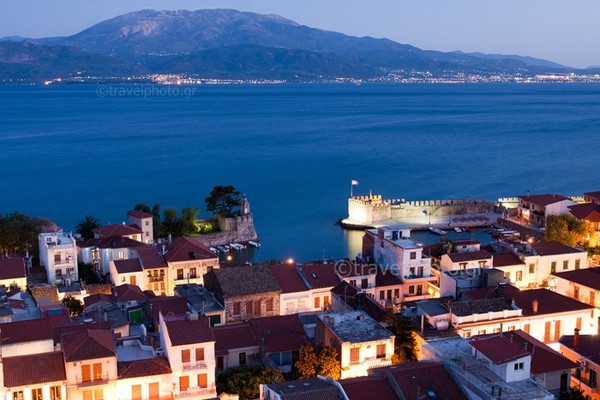 It is true that the spectacular views will reward you for trying to get there. One then visit the small but beautiful Venetian harbor, was the first level of defense fortifications of the city and drink a coffee or drink at one of the many cafes with good taste views of either the bridge at Rio Antirio either floodlit castle and quaint houses hanging from below.

Back to photo section

Access to Nafpaktos, if you come from Athens, may be following the Athens-Patras highway and crossing the Rio Antirio bridge. An alternative, more time consuming but beautiful course (now works in Athens, Patras and perhaps even shorter) is the route that passes from Arachova village, Delphi archeological site and museum, Itea and Galaxidi!

Athens-Nafpaktos distance: 271 km (Athinon-Patron highway and Rio-Antirio bridge). From the city of Patra, Nafpaktos is at 24 km only.

Route through Arahova and Delphi: 281km

If you want to get a feeling of how the cosmopolitan and crowded with tourists Santorini might have looked like back in the 50's...
travelphoto.gr